Take Me Out to the Ball Game—Again! 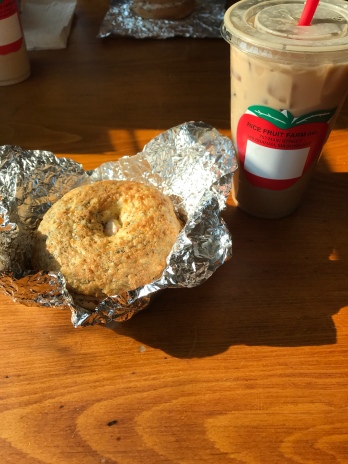 I was looking forward to this weekend, mostly because I was taking a three day weekend. I don’t go on vacation, so I normally take Fridays off during the summer from work. This week was weirdly crazy, so it was well deserved.

I started my morning off grabbing breakfast at a local shop about twenty minutes from my house. They offer breakfast and have a small bakery, plus they have locally made honey and maple syrup and ice cream. I’ve been there before a handful of times for ice cream, but Friday was my first time there for breakfast. I went with my mom, one of the girls from the ice cream shop, and her daughter. I got an iced chai tea and a wild cheddar bagel with veggie cream cheese, and we got a half dozen of bagels—which are locally made—and fresh cider doughnuts to go. (The doughnuts are delicious!)

After breakfast, I got gas for my truck and ran to the bank before watching a few episodes of The Blacklist on Netflix. It was humid outside, or else I would have sat outside and read. I recently picked up The Hellfire Club by Jake Tapper.

Then I was off to my second Hartford Yard Goats game of the season! I went with two of the girls from the ice cream shop—Jill and Meg—and Jill’s boyfriend. It was all of their first times going to the park, and I was excited to get to go back.

The weather in Connecticut has been, well, crazy New England weather, because we’ve gotten wicked intense spot thunderstorms all week because of the humidity. There was a threat of rain for later on in the night, so we brought little umbrellas just in case. (Thankfully, we didn’t end up having to use them.)

Aside from getting slightly lost trying to find the parking garage, we made it into Hartford just after 4:00 p.m. and headed to City Steam Brewery for an early dinner. It was my first time going there, and I picked it because I had heard really good things about it.

I got their SummerSteam draft and the Hickory burger, which came with cheddar cheese, barbeque sauce, and crispy/fried onions. Plus a whole pickle and fries that were similar to potato wedges but were just as good. Jill’s boyfriend ordered a brownie sundae for dessert to share with Jill but didn’t realize how big it was, so we all ended up splitting it. 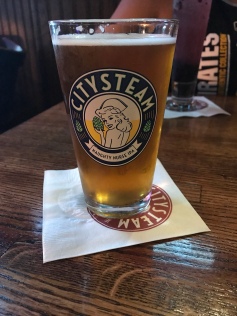 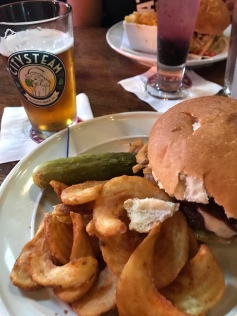 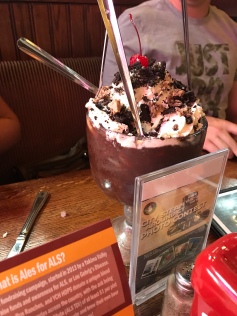 A few minutes after we originally sat down, there was one of the intense thunderstorms that stopped by the time we left around 6:00 p.m. We were a five-minute walk away from Dunkin’ Donuts Park and gates opened at 6:00 p.m., so we headed over. Our seats were on the first base side, about ten rows or so up from the dugout. 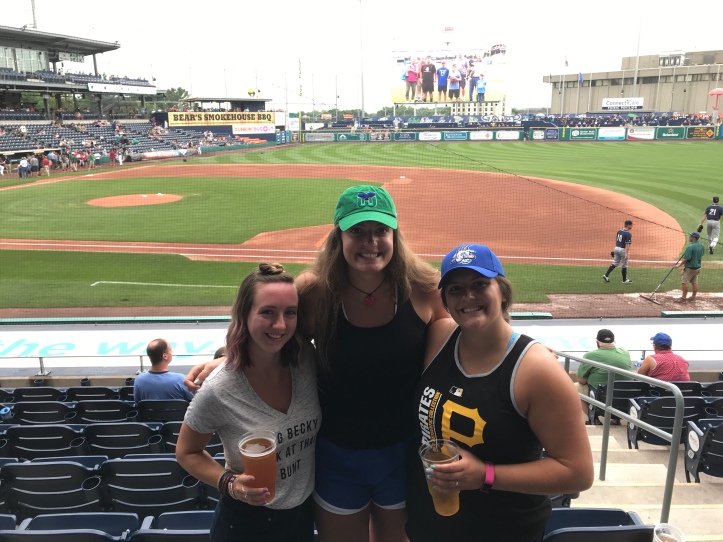 (My shirt says, “OMG Becky, look at that bunt.” Thanks, Routine Baseball.) Meg was chosen to be on the big screen to pick which ball the hat was under, and although she lost, she still got a gift card to Bobby V’s restaurant. (Yes, Bobby Valentine has a restaurant by the airport, and yes, I still hate him.)

The Yard Goats were playing the New Hampshire Fisher Cats, the double-A affiliate of the Toronto Blue Jays. And guess who I got to see play?! 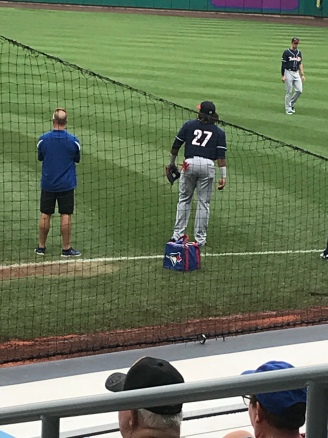 I had heard a few weeks ago that there was a chance Vlad was going up to triple-A but apparently he’s still with the Fisher Cats for now until he’s played a few games before moving up. I Googled him to find out his number and saw that he was warming up before the game. There were a bunch of people standing by the Fisher Cat’s dugout, and I assumed they were there for him.

I also looked up Cavan’s number just in case he was playing, too, and both of them started; Vlad was at third, and Cavan was at first. Vlad’s hitting just over .400 and hit a home run halfway through the game.

At another Yard Goats game and this time I’m obsessing over Vlad Guerrero and Craig Biggio’s kids. 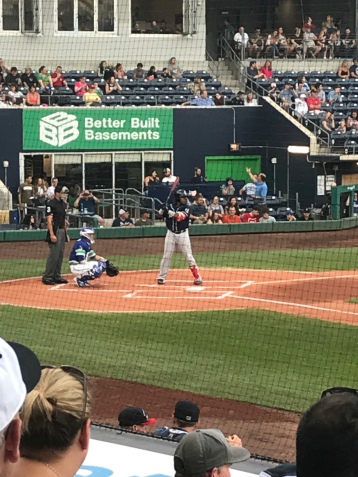 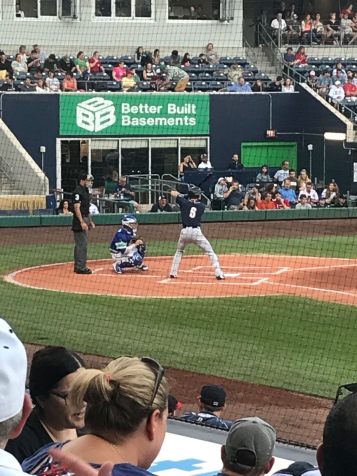 Vlad Jr. on the left, Cavan Biggio on the right. 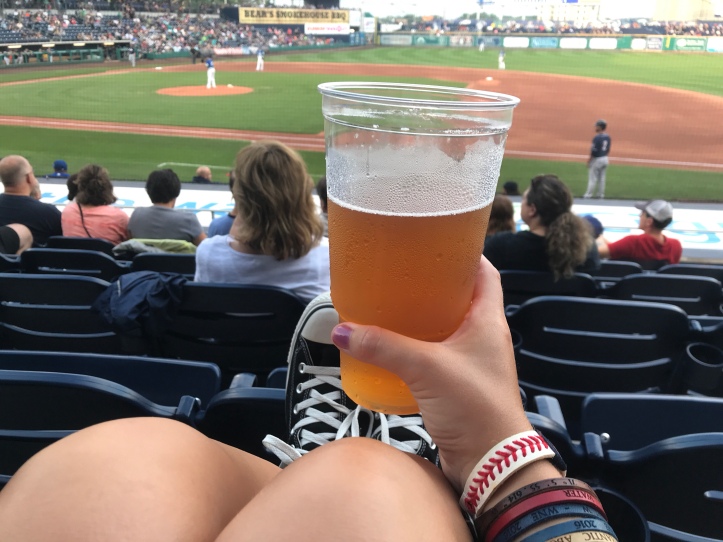 It was Whaler’s Alumni Weekend, so everything was Whalers/whale related. The Whalers were before my time, but they’re still a big thing in the state. The Yard Goats’ colors are the same as the Whaler’s to honor the team, and the players wore jerseys that looked like hockey jerseys. And Meg bought a Whaler’s hat. Because that’s what you do at a baseball game.

It started to sprinkle by the end of the game, around 9:45 p.m., and it never got worse, which was good because we had to walk back to the parking garage. The Yard Goats lost 3-1, but I think the Fisher Cats are really good this year. Maybe that means hope for the Blue Jays in the future?