Beer, BBQ, and Baseball: What Else Could I Want?

I spent my Saturday night at one of my favorite places: a baseball stadium. I live in Connecticut, and we don’t have any professional sports teams (don’t ask the old die-hard Hartford Whalers fans…). It’s about an hour and a half to Boston and about the same plus a train ride into New York, so it’s nice to be in between both sports cities, but it’s also nice to have one in your backyard.

The Hartford Yard Goats are the double A affiliate of the Colorado Rockies and are a spry young ball club only created two years ago. We used to have the New Britain Rock Cats, who were the double A affiliate of the Minnesota Twins—so that means David Ortiz traveled through Connecticut on his way to the majors, and I used to see Brian Dozier play all the time—but they stopped being a team and the Yard Goats were created. Well, the Rock Cats moved to Hartford and became the Yard Goats.

And in typical Connecticut fashion, they were behind on building the park and the team had to play the entire 2016 on the road. There were issues between the city and the developer, and the park, now known as Dunkin’ Donuts Park, was finished for the start of the 2017 season. (The New Britain Bees in the Atlantic League of Professional Baseball play in the Rock Cats old stadium.)

I used to go to two Rock Cats game a season with my parents, and my mom had friends that lived in the southern part of the state, so they would meet us at the games. They moved to Illinois a few years ago, so we lost our baseball buddies. (They live near Chicago and go to Wrigley every once in a while.)

So I love now being able to go to Yard Goats games because the tickets are cheap and the stadium is actually really nice. I went to the game Saturday night with my parents and one of my mom’s friends, and we sat about five rows back from the first base foul line. (We were to the right of the dugout.)

The Yard Goats played the Portland Sea Dogs, the double A affiliate of the Boston Red Sox, so I didn’t know really which team to root for. I use to know a lot more of the farm system, but I guess I’m not hip anymore. The only two names I knew on the Sea Dogs roster was Tate Matheny and Nick Lovullo, only because I know who their fathers are: St. Louis Cardinals manager Mike Matheny and Arizona Diamondbacks manager Torey Lovullo. Matheny started in center, and I think Lovullo is a backup infielder, so I didn’t see him play.

What’s funny is that before the game, they were showing the league leaders on the video board and Cavan Biggio’s name showed up, my dad and I both looked at each other, and I already had my phone out Googling Craig Biggio (his dad and recent Hall of Fame inductee). He plays for the New Hampshire Fisher Cats, the double A affiliate of the Toronto Blue Jays. Vladimir Guerrero’s son also plays for the Fisher Cats. I’m going to a game at the end of this month, and the Yard Goats are playing the Fisher Cats, so I’ll get to see Vlad Jr., which is cool. (And he’s hitting like over .400).

I got my Bear’s BBQ but not my Nectar of the Goats beer. My dad and I walked around the stadium looking at the taps and didn’t see it, but I think it might have been at the BBQ stand but it was took busy and I had already bought a Sam seasonal. I always get what Bear’s BBQ calls a “Mac Attack” which is pulled pork on mac and cheese. (They also always have a spot at the Big E in the Connecticut house and I love it.) 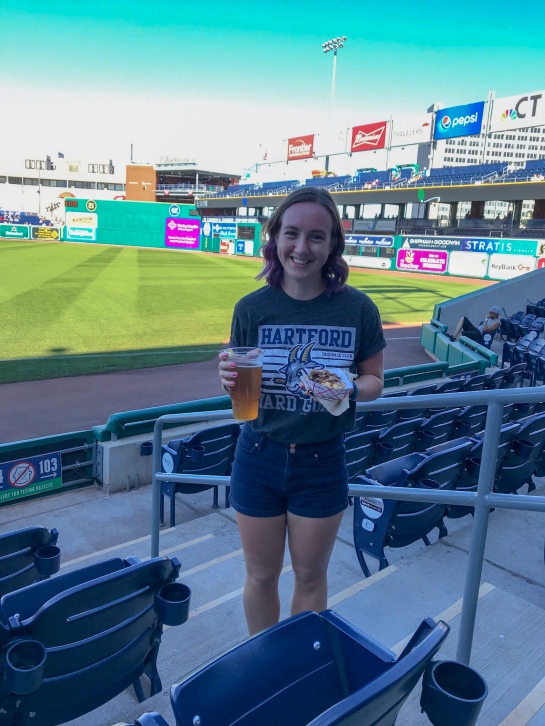 I noticed that on the video board, the listed the amount of mound visits left for each team next to the left on base stat. That was the first time I had seen that, and I was interested to see that the minors get eight per game while the majors get six. They also had a pitch clock in between pitches that was 20 seconds; I don’t think it dramatically sped up the game, but I know they’re experimenting with them in the minors before trying to re-introduce them in the majors.

The Yard Goats won 5-0, and there were fireworks after the game. The team and park appeal to kids and has little things in between innings; I mean, what minor league game isn’t gimmicky? It’s what makes the games. Saturday night was Christmas in July themed, so the goat mascots—both of which I avoided—were dressed up in Santa outfits, and there was a guy who was the Elf on the Shelf who was sitting in random places around the park. And after one inning, they had a Little Reindeer race where three little kids ran from first to third on the grass just outside the infield. (Normally, they wear little goat costumes, but they were in little reindeer ones instead.)

My dad was looking into getting tickets to a game next month, but they were pretty much sold out—unless you wanted random seats around the park. Next year he said he’ll buy tickets to two games before the season starts.

I’d love to go to Fenway more, and it’s not too far away, but you end up making a day of it, and sometimes it’s just too long. That’s what we did when I went last year. Plus tickets can be expensive—I paid $66 for a seat at Fenway last year vs. the $16 tickets at DDP—and so is the beer. Minor league games seem to be a little more personal and a little less serious, and I hope to get to go to other parks in the future.

PS: Wondering what a “Yard Goat” is? According to Wikipedia, “yard goats” is rail-yard slang for the switch engines that shuttle train cars between different locomotives. The team is blue and green, the same colors as the Whalers, and everything is goat related. Because why not? I mean, there’s a team called the Rumble Ponies and the Rubber Duckies, so anything is possible.